So you know how this story ends.  I spoiled that by jumping to the celebration earlier this week. 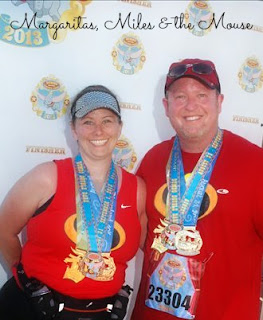 Here’s how it all began.  This story starts back in January at the Tinker Bell Half.

They say timing is everything, and boy, did runDisney time the announcement of the Dumbo Double Dare Challenge just right for me!  Early registration opened during the hoopla and excitement of the 20th anniversary of the Walt Disney World Marathon.  I watched a lot of internet friends complete Goofy and the wheels started turning.  Yep.  I was thinking I might need to step up and go Goofy.

Wait.  Just, wait.  Shenanigans… you haaaaatttteeeee to run, right?  What the heck are you doing thinking about Goofy? 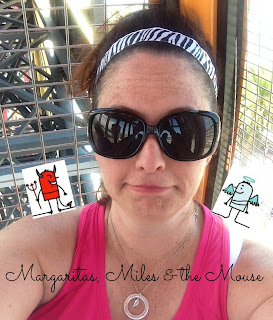 You are correct.  That’s exactly what the angel on my left shoulder was saying while the devil on the right was encouraging me to go Goofy.  And hellllooo runDisney steps in and offers the best compromise ever!  A new race, a new challenge, and one that certainly seemed attainable.

The next step was convincing Mr. Shenangigans that I needed (yet another) trip to Disneyland to run another race.  This part was actually pretty easy.  It went something like this:

Me:  Sooooo… there’s this new race in Disneyland.  You run a 10K on Saturday and a half on Sunday.

Him: Oh.  Do you get an extra medal or something?

Apparently Mr. Shenanigans is also all about the bling!  Who knew? 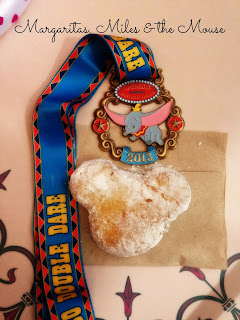 We signed up using our early registration option while I was at Tinker Bell, and man, I’m so glad we did.  There was not really any time to think about this challenge- it sold out in 52 minutes during open registration.  Folks, Dumbo was popular.

Fast forward through the next 8 months, all the whining, the training, the heat (my gaaawddd, the heat!), and the injury and we arrive at Disneyland ready for our first challenge race.  Strike that.  We were there to run it, but I won’t claim we were exactly ready for it.  But it was time and it was happening, and we were going to make this work. We believed! 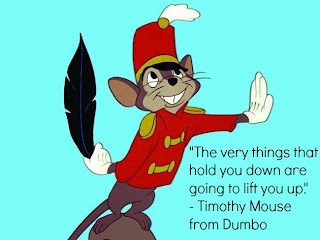 I finagled my whole family into running this race.  What started out as a family of 6 turned into a group of 14 traveling to Disneyland to run.  Everyone had a race, even #OhLucy.  This was also a first race for most of them and a first runDisney race for everyone but me.  I was crossing my fingers we would pull it off with everyone in the right places at the right times.  Saturday was the big day with the 10K and Kids Races both scheduled.

We were at Disney, so I also made everyone run in costume.  Only a couple of them hated me.  Surprisingly it wasn’t Mr. Shenanigans or my Dad.  The 10 year old boys were another story all together. 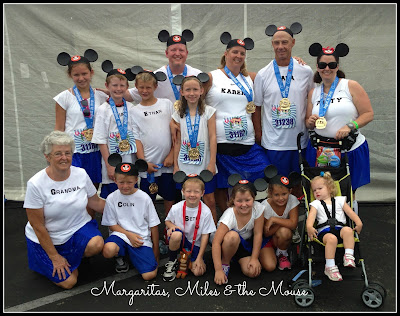 First up was the 10K race on Saturday.  runDisney brilliantly themed this one with Alice in Wonderland.  They went all out here.  The mile markers, the music, the characters were all centered around the story.  Runners, you came up with some AMAZING costumes for this race!

Simply put, I LOVED the 10K.  I am sending out my positive vibes to the runDisney decision makers that they choose to keep this course for the Tinker Bell 10K coming up in January.  It was perfect for someone like me who needs lots of distractions!

Mr. Shenanigans and I decided to take this race really slow.  Saving our energy for the half.  No really, that was a conscious choice.

Okay, you got me.  We were going slow no matter what.

But we planned to run the 10K with our non-runner niece, who we talked into doing this with bribes of cool behind the scenes areas and a chance to get a lot of character pictures.  The course did not disappoint.  My 12 year old niece really impressed me.  Not one complaint.  Y’all, this was huge.  You know how I hate to run?  But I do it anyway?  Well,  she doesn’t run.  She dances. She is in Karate. But she does not run. At. All. 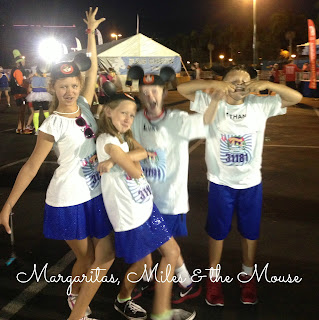 We had three 10 year olds and a 12 year old running with us this race. The dudes- we just turned them loose with instructions on where to meet us at the end.  The boys are wicked fast and no way were they stopping for pictures.  My 10 year old niece was on the fence.  We thought she’d stick with us, but she took off like a gazelle when the corral was released.

Um, yeah, we sent my 65 year old father after her.  I’m not ashamed to say it- he’s in better shape than me and went couch to 10K for this race… and finished in 1:19.  Oh- and he wore his Mickey Ears the whole time.  If you knew my father, you would understand how much a big deal this is.  He doesn’t do stuff like wearing Mickey Ears in public… but he did for me.  And I love him for it.

During the race I saw lots of my blogging friends and pals from PbRC and Team runDisney.  The Princess Posse was also out in full force on the course.  These are all groups I’ve joined on Facebook and people I consider friends.  My niece kept saying, “You know everyone at Disneyland!” and I kept thinking… aahhhhh, internet, how I love you.  I really felt a sense of community with my fellow runDisney lovers on the course.  I appreciate all of you who slowed down enough to chat a bit with me!  Thanks, friends, for being there! 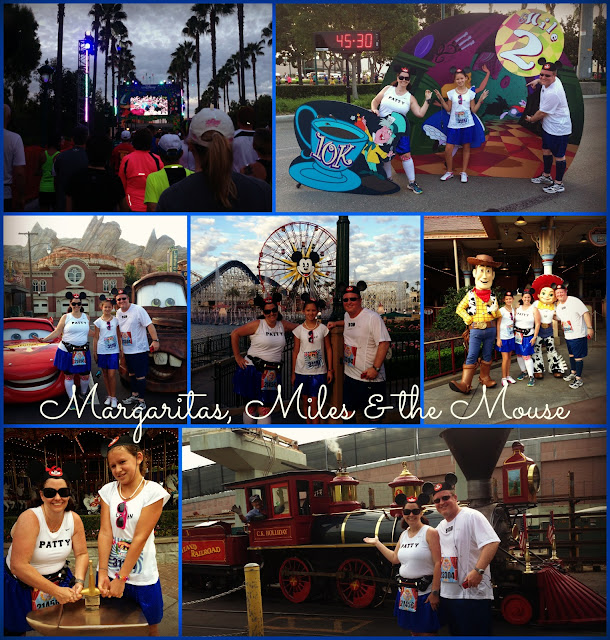 Loved the race, but I did NOT love the weather.  I’m sure you have heard all the horror stories about how bad it was.  And yep.  It was bad. And this is coming from someone who lives in Texas.

By mile 4.5 I was pretty whipped and having serious doubts about finishing the half the next day.  I’m pretty optimistic about things, and also pretty much a Scarlett O’Hara type who doesn’t worry about things until I have to, but the soupy heat and the misery of Saturday quickly caught me.  I was worried.  I won’t lie.

I reduced the group to a walk the last 1.5 miles and had all these thoughts and doubts creeping into my head about the next day.  If the weather stayed like this, going twice as far was going to be a huge struggle.

But you know what cheered me up?  Heading through Downtown Disney I looked over and saw some familiar faces.  They were just hanging out, watching us caboose runners, and cheering loudly.  You know, if it had been me, I’d be chillin in my ice bath in my room, enjoying the air conditioning.  But these two were hanging around and watching people finish.  I’m not sure they realize what a pick me up they were at that point for me!  Thank you Bobby and Heather for being there.

We finally made it to the end, and y’all, that medal is pretty sweet.  The teacups are one of my favorite rides, the mad tea party a favorite scene in the movie, and this one looks pretty nice around our necks. 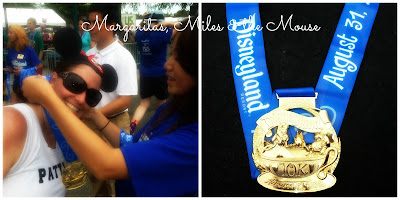 What do you think about the new 10K races? Did you run on Saturday? How did you do in the heat?

AWESOME recap and photos! Sounds like a dream race :) I have heard horror stories on this year's weather and I am so surprised by it! Before this race, I have heard nothing but great things about how great the weather is over in Cali for the Disneyland races! Guess there's a first time for everything? Y'all did a great job though!!

It's funny because the locals were all "it's always hot here during Labor Day" but I thought they meant hot in So Cal terms- high of 80. ;) It was tough, it really was. But not as bad as PHM this year I don't think.

Great recap , this looks like so much fun! Congrats :)

IT really was- thank you!

Omg, I just stumbled across your blog and we totally walked past you guys while you were taking that group picture! I remember thinking, wow, that's a lot of people to organize!

Yes, the weather made things really difficult, but DL Half has always been my favorite, so I'm sure I'll be back!

Ha! Too funny. Yeah- we are quite a crew. Thanks for stopping by! How was your race?

I love this recap! What a blast you had with the whole family! I have a soft spot for your dad wearing Mickey ears for you. I have the same relationship with my dad. He wouldn't do something like that for anyone but me haha, Hell, I have already convinced him to dress up like King Stefan if he is able to walk the 5k at Princess Half Weekend!

I completely agree with you too about the people who hang around after. It matters so much and you don't realize just when you need that pick me up and BOOM there it is.

This makes me even more excited for the Glass Slipper Challenge! Your pictures are fantastic too!!!

Thank you Meg! Hope your dad can make it to PHM and be King Stefan- LOVE that!

Congratulations on completing the run. Looks like everyone had fun

Thanks Karen! WE sure did!