Re-posting today in memory of my Jacob.? Originally posted August 17, 2013.? Happy Birthday to my favorite engineer!

Not the typical answer to the question: what’s your favorite ride at Disney?? I know.? But my love of Walt’s trains can be traced back to this guy: 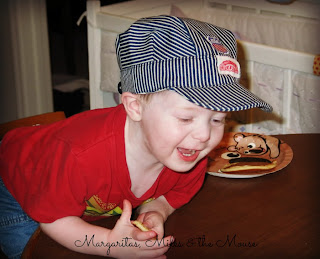 Twelve years ago today he made me a mom.

Jacob was born with a heart defect which required open heart surgery at three days old.? After complications with a separate surgery, he received a heart transplant at nine months old. That heart – the gift of life– gave us three more years with our Super Jake.? He passed away in 2005 shortly after his fourth birthday due to a cancer that can affect transplant patients.

He is missed- as you can imagine- every day.

I’m not sure how to describe Jacob without sounding too mushy.? He was sweet, quirky, funny, so very smart, a great big brother to Luke and Claire, and absolutely obsessed with trains.? He met Thomas the Tank Engine on an innocent play date when he was 2 years old, and never looked at a Matchbox car again.? Trains were his “thing,” which shouldn’t come as a shock since my family has a long history of working on the railroad.? My Great-Grandfather, my Grandfather, my Uncle, and my Dad all worked for the Southern Pacific Railroad for their entire adult lives.

With all that history, I find it pretty surprising that the only trains I’ve ever ridden are the ones in Walt Disney’s parks.

It’s become a tradition for me, one with roots going back to our time living in Orlando.? I took the boys on day trips to the parks and we always started out on a train.? The monorail counted for me, but did not count for Jacob.? So up the stairs we went and onto Walt’s railroad. One lap around the park and we could start our day at Walt Disney World.

In two weeks I’ll be at Disneyland for the third time in a year. It will also be my third attempt at taking a ride on the Lilly Belle, Walt’s personal & private train car named for his wife. Can you think of anything more special than riding through Walt’s original park on the Lilly Belle? I know I can’t.? This has moved to the number one spot on my Disney Bucket List.

(ETA: I did not get on the Lilly Belle in 2013, and it likely will not happen now.? Strong rumor has it that only Club 33 members can take guests on the Lilly Belle. #SadTrombone? Dreams do come true, but I don’t expect to ride the famed caboose anytime soon.? I’ll admire her from afar!)

I sure hope we can luck out and catch a ride on the caboose of the C.K Holliday steam engine!

I feel that Walt and Jake were kindred spirits with their love of trains.? Those day trips weren’t my first Disney memories,? but they are certainly some of my sweetest. Thanks to Jake I became not only a mom, but a huge fan of the Disney World and Disneyland Railroads.

Do you have a special connection to an attraction or ride at one of the Disney Parks? Have you ever been on the Lilly Belle?

Such a sweet post. I hope you get to ride the Lilly Belle for Jake! *hugs*

Thank you for sharing your memories and stories about Super Jake with us. I tell my little guy "the monorail story" every night about visiting Disney and we always buy popcorn and ride the train (in our story). Hugs to you and your family!