Home » Entertainment » What, You Didn’t Sing With The Cast of Frozen 2 Last Week?
Spread the love

I’ll preface this to say: this kind of thing never happens to me. Yes, I’ve been to press conferences before and yes I’ve even been able to talk one on one with celebrities about their films. But I’ve never- not in my wildest dreams- thought I’d sing with the cast of Frozen 2 in a press junket turned 80s rock ballad sing-a-long. But this is Hollywood, baby!

Last week I attended the Frozen 2 press junket with a room full of entertainment writers. I expected some serious discussion about the creation of Frozen 2, the reasons behind making a sequel, and even how the cast felt about the experience.

I also expected to hear a lot about the music from the film- this is Frozen TWO, after all. And sitting in a room with talents like Robert Lopez and Kristen Anderson-Lopez (the songwriters and geniuses behind the music) begged for a musical discussion.

Both of those expectations were met, but what I didn’t expect- and you won’t either- was the impact of one song choice in Frozen 2 and how it would spill out into this audience in the form of an 80s power ballad sing-a-long.

Kristen Bell’s One Criticism of the First Film

Look, we can all talk about the reindeer in the room, right? Johnathan Groff didn’t get to sing enough in the first film.

“That was baloney, and I’m glad you’re bringing that up,” Kristen Bell said. “Kristen (Anderson-Lopez), I’m going to look at you… you guys…” as she playfully glared down the line to where the songwriters sat.

Kristen Anderson-Lopez laughs with mock surprise, “Who knew he was talented?!”

Bell said, “That was my one criticism of the first one. I was like, Look, it’s an excellent film. But Jonathan Groff doesn’t sing.

So that’s how it failed. But this time, everybody knew what to do.

And Jonathan has dare I say- I mean, it’s very difficult to describe and I don’t want to blow it- but it’s one of the top three moments of the film.”

K-Bell and I: we’re totally on the same page.

Because this song by Jonathan Groff is THE moment in Frozen 2 that I walked out of the film talking about. Its epicness cannot be understated, particularly if you are a child of the 80s. 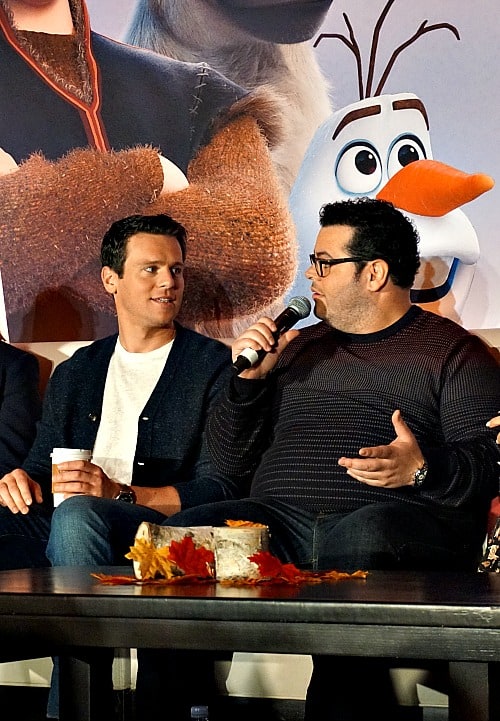 Look, if Olaf- OLAF– is making a statement like that, then you KNOW this song is going to be good!

Jonathan Groff tried to play it off- “But… we were trying to go for tragic!”

Bobby Lopez backs up the seriousness of the moment and blames it on the animators. “It was completely genuine when we were making that song- there was nothing funny about him at all. And then the animators did some crazy takes…”

Kristen Anderson-Lopez: “We had candles in the studio. We were like Jonathan just breathe in breathe out think to back to all of the heartbreak you’ve been through.”

Groff: “I was wearing that long wig and there was that wind machine… it was really powerful.”

After we all laughed- because, y’all, not a single word of this was true and all was said in jest- the question was put to Groff to share the moment when he walked into the recording booth for this song.

“Well, it was such It was such an amazing experience. Bobby and Kristen it said to me at the beginning and as well as (directors) Jen (Lee) and Chris (Buck), you know, we want Kristoff to have a song.

And I thought ‘that’s so sweet of them to say but how does a mountain man break into song?’ I’d so much rather hear Idina sing like an 8th ballad than hear…” Jonathan tells us.

While the movie has a lot of female empowerment moments, Groff’s Kristoff plays a pivotal role as well.

Evan Rachel Wood has been talking about it in her interviews and a couple of lines in particular that she wanted to call out.

“There’s one moment where she (Anna) is in distress. And he (Kristoff) swoops in and picks her up and it’s in the midst of battle, right? He doesn’t say ‘I’ve got you’… and start taking over.

He swoops her up and very quickly looks at her and he says, ‘I’m here. What do you need?’

Yes, it’s mind-blowing and then the other one when Anna apologizes to him for something. She says ‘I’m sorry.’

And yeah, we all swooned a little bit more over Kristoff (and hey, Evan as well!) at this moment.

What we can all agree on here is that Frozen 2 is not just for little girls. Everyone is going to feel the egoless love and devotion that should be in our own relationships.

Wood went on to say, “When magical Sven says, ‘you feel what you feel and your feelings are real.’

I think if that one message comes across to boys, that the boys get to feel empowered to feel their feelings in a big- or small- but hopefully big 80s power ballad kind of way, then we’ve done a little bit in the war against toxic masculinity.”

About This 80s Power Ballad in Frozen 2

We asked Bobby and Kristen Lopez about the thought process of including this 80s kind of boy band power ballad song in the movie.

Was it always intended to sound like this or was it something that just came about?

Kristen, “It’s so funny because we work so closely with Jen and Chris and Peter (Del Vecho), that I can’t even pinpoint whose idea it was. I definitely remember breaking up with my, my eighth-grade boyfriend and just listening to Bryan Adams ‘Heaven’ over and over. Why would I do that?!”

Bobby added, “I just remember we had it down to two ideas. I guess one was this, but the other one was like if we could give him sort of like a Snow White kind of “I’m Wishing” song.”

Kristen explained the choice a little more and punctuated it with her own version of The Glory of Love. True story.

“But the truth is Bobby and I adore 80s music, the melodies and the chord shifts are really complex. We struggle with many projects with men being able to sing an ‘I want song’.

It’s very, very hard unless they are orphans, new to the country, saying like ‘I’m Not Giving Away My Shot!’

It’s hard to have a man sit down and go here’s who I am.

So in order to thread the needle of allowing us to it, at the moment, it needed to be a fun moment where we’ve been in the woods, we’ve learned some really heavy things.

We needed to have a moment of fun, but we also didn’t want to lose the tether to real emotion and real problems of transformation that are happening in the woods.

So what is the best way to have some fun to be in the same way that when we sing any song, you know about, like, ‘I give it all for the glory of love!'”

At which point we all broke out into a little karaoke with the cast of Frozen 2 singing Peter Cetera’s “The Glory of Love” lead by Kristen Anderson-Lopez.

Wrapping Up The Frozen 2 Press Junket In Song

After the hour flew by, the cast stood up and gathered together for pictures. Totally normal- and appreciated by the gathered press.

In normal press junkets, you’d hear a little bit from the soundtrack playing through the overhead speakers as this the photo moments happen.

In this one? The sound guy got in on the act.

“Oh, You’ve Got To Be KIDDING me!” Gad laughed when he caught the first notes of- you guessed it- Bryan Adam’s “Heaven” playing overhead.

And so he started to sing it.

And everyone- and I do mean everyone– joined in. Because you know I wasn’t about to miss my shot at singing with Bobby and Kristen Lopez, Idina Menzel, Kristen Bell, Josh Gad, Evan Rachel Wood, and Jonathan Groff.

And that, my dear readers, is how the amazing Frozen 2 press junket AND sing-a-long ended.

Does Elsa Have a Girlfriend in Frozen 2?

noguiltlife.com
Spread the love
« So, Does Elsa Have A Girlfriend in Frozen 2?
How I Scored Disney+ For Less Than $3 A Month »